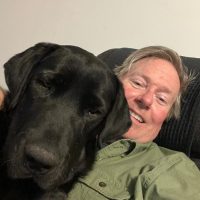 Young Saba has been quite busy since adopting his human, Brian, but this very good boy took a few moments out of his always packed schedule to send us an update:My name is Saba and this is my story.  I am from the mean streets of Texas, where food was scarce and affection even scarcer.  I’m a black Lab about 1.5 years old (but who can be sure, I didn’t really know my parents).  My life changed one day when a human picked me up off the street – next thing I know I’m on a plane!  If only they’d flown lower and with the window open – I KNOW there were SO MANY squirrels in those trees we passed over.  48 hours later I met Brian.  I walked into the room and immediately knew I could train him – I mean, the dude had a treat bag on his hip – what a great start! 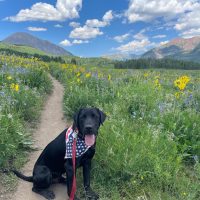 I’ve been with Brian about four months now and we’ve had many adventures.  I got him to enroll in “doggie school” (which is a weird name – it should be called human school).  School taught him to give me treats and affection whenever I was a good boy – and I’m ALWAYS a good boy.  Well, he doesn’t seem to like it when I eat nearly anything I can find on our walks; maybe I should stop doing that.  He also doesn’t seem to understand that when he says “stay” I’m only going to stay while I can see him – it is my duty to make sure he doesn’t wander off and get lost, so I can’t let him out of my sight.  Every now and then Brian does escape the house without me, but I wait by the door for his return – if he’d just give me a cell phone I could call the authorities to let them know he’s missing – but somehow Brian always finds his way back.One of my favorite adventures was a road trip to Crested Butte.  SO beautiful.  And the smells?!?  Amazing!  And the new creatures?  I saw some dogs that were about 10 times taller than me and there were humans RIDING THEM!  They all had the same name, which I thought was weird – Ahorse; at least, Brian kept telling me “That’s Ahorse.”  I also saw a strange looking dog that was about five times taller than I am, and this one had HORNS!  I thought it was a devil, and it made Brian sad; at least, he kept saying “Oh deer.” 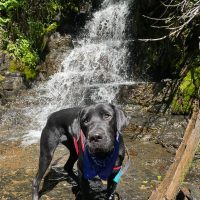 So that’s my story.  So different from living on the streets.  I wake up every morning to pets, then breakfast, then Brian and I go on an adventure.  I’ll even admit that I enjoy the times we cuddle on the couch.  Thanks Safe Harbor Lab Rescue for completely changing my life!

Many thanks to Ronda and Steve for fostering Saba!