I adopted Gannon in April of 2004. I have had many dogs but Gannon was the best. I stayed in touch with his original owner and we became friends over the years and I kept Tom updated about Gannon. Gannon never got in trouble and was the most loveable dog I ever met. We would play ball together. I would throw him the ball and he would throw it back. He made a game out of anything I was doing. Gannon had 2 major knee surgeries and he was my $8,000.00 dog. TPLO was the name of the surgery and he was well worth the price. 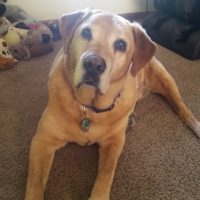 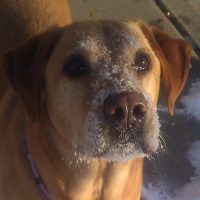 I loved Gannon with all my heart and he loved everyone. June 9th 2016 was his last day on Earth and I had to put him down at 10:15 that night. I had the vet come out and my neighbors came over and helped. He passed very calmly and his suffering ended. He had a Good Citizen Award Badge on his collar and he was the best. I had him cremated and his ashes sit on my dresser until Easter of 2017 when I will spread them on his favorite resting places as I did with his sister Malibu. God Bless Him. He helped me through tough times.

Samuel Clemons said” I don’t know if dogs go to heaven, but wherever they go that’s where I want to be”. I love you, Gannon.